Which film do you want to watch on the 22nd dec?

Ever wondered about Kenyan Films? Worry no more. Here we bring you snapshots of old and new Kenyan films in the market. Enjoy and support. 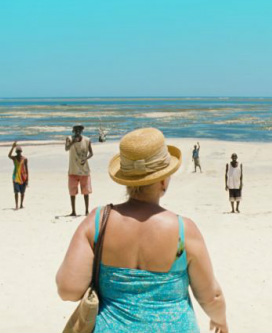 The movie stars Margarethe Tiesel as a 50-year-old Austrian whose search for love turns increasingly predatory.
Previously a stage actress, this is her first major film role and she appears nude through much of the film and has several graphic scenes with Kenyan beach boys.

But the actress told journalists that she did not judge the character's behavior.
She said the movie examined female loneliness and the way 'people who are exploited at home travel abroad and become exploiters in turn.'
Mr Seidl, who looked at east-west friction in Europe in his 2007 Cannes entry 'Import/Export,' plans the film as the first in a trilogy about modern tourism.


The director views his European and African characters with the detached eye of an anthropologist. Seidl began as a documentary maker, and even on his fiction features shoots without scripted dialogue and mixes professional and nonprofessional actors.